Castle Rock man flights to save home, business after being listed as dead on credit reports 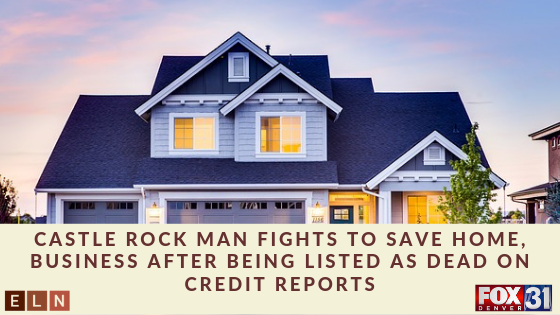 A Castle Rock man is fighting to save his home and business after he was listed as deceased by credit reporting bureaus. Jerry Powell said everyone should check their credit report for errors to ensure they have time to correct them before they wreak havoc on their lives. Powell was launching a new company called Takeaway Tables when he discovered the devastating mistake.

He received a call from a closing officer saying they could not provide him funding.
“She said, ‘You’ve been declared dead. I’m going to send you an email,’” Powell said. “I literally thought to myself, ‘My entire world is about to crumble around me.’”
Powell said he couldn’t get a loan.

“So, for 15 days, my entire family — three kids and a dog — we lived in a 25-foot camper in San Isabel National Forest,” Powell said.

A lawyer is clearing up the matter, but another mix-up now shows Powell is being identified as his father, who passed away in 2017. Denver Attorney Eric L. Nesbitt told the FOX31 Problem Solvers that any issues with the credit reporting bureaus should be addressed immediately. Read the full article here.