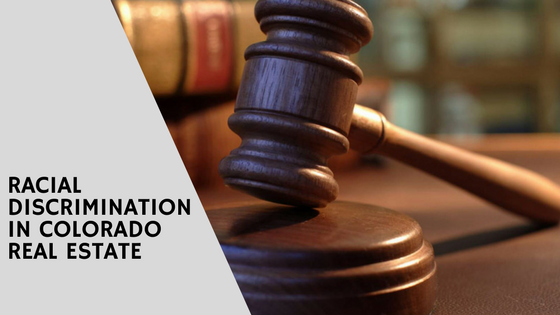 As Colorado’s population grows and becomes more diverse, so do potential issues with respect to real estate and race. While Denver and other Front Range areas have long-standing Latin communities, others are relative newcomers to the scene. Though unlikely, it is possible that a seller will refuse to sell a house or other property to a member of a minority community. This problem may be compounded during the current Colorado real estate boom, where there are multiple buyers and few sellers.

Response
As part of the Civil Rights Act of 1968, which includes the Fair Housing Act (FHA), the federal government made it a federal crime to discriminate in home sales or rentals based on race, religion, national origin, sex, or color. As a result, laws that sought to exclude certain minority groups from certain areas were no longer in play. In 1988, Congress amended the FHA to include a ban on discrimination based on familial status and disability.

Colorado Fair Housing also bans intimidation. That is, it is illegal to threaten, coerce, or otherwise intimidate someone who is selling to someone who is protected under the FHA. What is more, it is also illegal to advertise or suggest that the sale of a home will not be toward a specific group or a suggestion that the seller has a preference toward a specific group. Therefore, a realtor must be careful when advertising a home or showing a home.

Enforcement
If you believe that you are being discriminated against in housing, you can file a complaint with the Department of Housing and Urban Development. You can also file a complaint with the Colorado Civil Rights Commission. Are you active in real estate in Colorado? You need an attorney who knows the law and knows the market. For questions about real estate legal needs in Colorado, contact the Law Offices of Eric L. Nesbitt, P.C. at 303-741-2354 or Info@NesbittLawOffices.com.