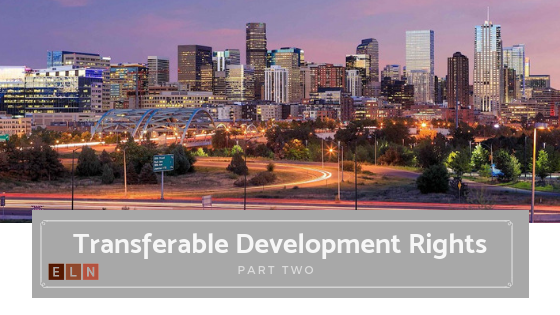 According to reports, part of why the city of Houston has been so devastated in the wake of Hurricane Harvey is because of the discrepancy between the city’s depression-era water and flood system and its modern-day buildings. While the city of Houston, with its large population, aggressively sought to be ranked as a premiere city, its infrastructure was less than premiere, according to those reports. Instead of areas of wetlands absorbing much of the water, those areas are now covered in concrete and are unable to absorb any water. As developers planned buildings and traffic patterns, they did not plan for drainage.

When planning a community or a city, thought must be given to wetlands and open space. Those planning can employ transferable development rights, or TDRs. As mentioned in the first article, TDRs are sellable rights wherein a landowner who owns a right to develop on a property, called a sending area, can sell that right to another landowner who can use those rights, called a landing area. This commonly occurs in an area that discourages development so the landowner can profit from the sale of the TDR while the buyer can develop in an area that encourages such development. Under a TDR transaction, both the buyer and seller retain title to their respective properties; it is the developmental rights that are transferred.

Often, developers who seek to build in areas encouraging high-density face opposition from the locals, who point to local zoning laws that do not permit such building. In truth, TDRs are a powerful tool to further preservation of wetlands and agricultural areas while providing services in high-density areas. When this occurs, it is often the job of the attorney representing the developer to explain this concept to those in the opposition. TDRs are not meant to circumvent existing zoning laws; instead, they are used as part of a plan to properly allocate space.

When planning, the parties should be careful not to undermine the purpose of a TDR program. Sometimes, a zoning board, in its zeal to see the success of the plan, will upzone, or grant rights beyond the zoning ordinances, to the developers. While it may score points for a specific project, upzoning undermines the TDR program because it ignores that right. As mentioned, TDRs, unlike specific zoning ordinances, can be used to allocate open space and density. By maintaining the developmental right by the selling area and not transferring it to the landing area, the selling area is at risk of being developed.

In Houston, Texas, it seems that developers never instituted a comprehensive TDR program, where developers would purchase TDRs of a wetlands and use that to build elsewhere while leaving the wetlands intact.

For questions about transferrable development rights or other real estate legal needs in Colorado, contact the Law Offices of Eric L. Nesbitt, P.C. at 303-741-2354.